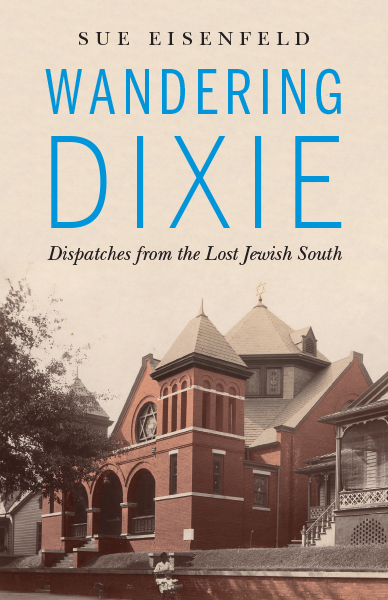 Dispatches from the Lost Jewish South

“[Eisenfeld’s] travels take her to abandoned or dying synagogues and endangered graveyards, and her ruminations highlight both Jewish history and lack of current resources to maintain sites and records.…Her stories provide many revealing tidbits for those who enjoy self-reflective historical writing.”—Publishers Weekly

“Eisenfeld's narrative of her reactions to what she experiences as a liberal, Jewish woman in the South … is its own story that makes the history she shares more personal and more meaningful than it would be if she chose to set aside her subjective self. The reader accompanies her on her many journeys, and the travel is always engaging.” —Linda Levitt, PopMatters

“In [Wandering Dixie], Eisenfeld's itinerary is both organized and serendipitous. The souvenirs she picks up along the way, like the weeds in so many of the overgrown Jewish cemeteries she visits, amount to a beautifully nuanced and moving portrait of acceptance and accountability.”—Cathy Alter, Washington Independent Review of Books

“In stunningly elegant prose, Eisenfeld uncovers the anonymous corners of Jewish and Confederate history. In this immersive gem of a book, she inspires hope for a nuanced and vital conversation about race by claiming her own role in ‘our troubled American story.’” —Michelle Brafman, author of Washing the Dead

“Beautifully written and highly thoughtful, Wandering Dixie takes us on a powerful journey through the physical and internal landscapes of the South. Eisenfeld confronts religion, race, and reckoning, revealing the powerful vectors in our lives that push us into the unexpected.” —Randon Billings Noble, author of Be with Me Always

Sue Eisenfeld is a Yankee by birth, a Virginian by choice, an urbanite who came to love the rural South, a Civil War buff, and a nonobservant Jewish woman. In Wandering Dixie, she travels to nine states, uncovering how the history of Jewish southerners converges with her personal story and the region’s complex, conflicted present. In the process, she discovers the unexpected ways that race, religion, and hidden histories intertwine.

From South Carolina to Arkansas, she explores the small towns where Jewish people once lived and thrived. She visits the site of her distant cousin and civil rights activist Andrew Goodman’s murder during 1964’s Freedom Summer. She also talks with the only Jews remaining in some of the “lost” places, from Selma to the Mississippi Delta to Natchitoches, and visits areas with no Jewish community left—except for an old temple or overgrown cemetery. Eisenfeld follows her curiosity about Jewish Confederates and casts an unflinching eye on early southern Jews’ participation in slavery. Her travels become a journey of revelation about our nation’s fraught history and a personal reckoning with the true nature of America.

Sue Eisenfeld is a freelance writer, communications consultant, and faculty member in the Johns Hopkins University MA in Science Writing Program. Her work has appeared in the New York Times, Washington Post, The Forward, and other publications. She is the author of Shenandoah: A Story of Conservation and Betrayal. Find her at www.sueeisenfeld.com.

Jews, the Confederacy, Race, the South, and Me: A Prologue

Through a Long Absence: Words from My Father's Wars

Words from My Father's Wars