Home | Books | Supremely Tiny Acts: A Memoir of a Day 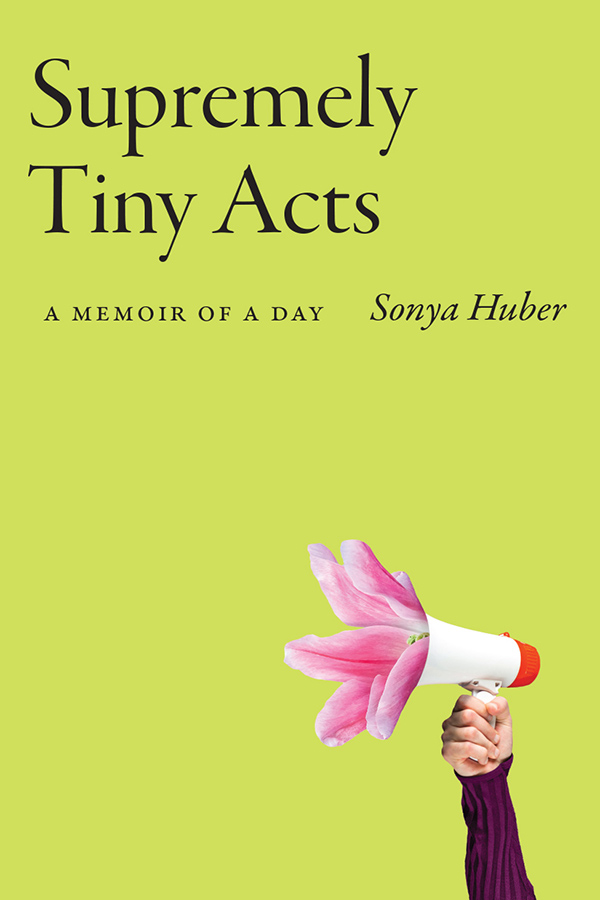 A Memoir of a Day

“It’s hard not to be impressed with the ambition of Sonya Huber’s Supremely Tiny Acts. A day can be made to encapsulate almost everything: the minor (the simple joy of half-and-half) and the major (looming climate catastrophe, parenthood, sexual violence, and what we owe to one another). It’s a thrill when Huber pulls it off.” — Ander Monson, author of I Will Take the Answer: Essays

“Huber embodies Montaigne’s proverbial ‘runaway horse mind’ as she adopts an unwavering split stance as both freethinker and keen observer, unapologetically acknowledging her own unruly yet intriguing mental patterns. I felt like a piece of wood drifting across the ocean, pleasurably caught in waves of sentences bumping me from one idea to another and making me reluctant to return to shore.” — Adriana Páramo, author of Unsent Letters to My Mother

“I think we have to get to the real, to catch the facts we have, to hold on to what we see … in this time where lies are currency,” Sonya Huber writes in her book-length essay Supremely Tiny Acts: A Memoir of a Day. On the theory that naming the truths of quotidian experience can counter the dangerous power of lies, she carefully recounts two anxiety-fueled days one fall. On the first, she is arrested as part of a climate protest in Times Square. On the other, she must make it to her court appearance while also finding time to take her son to get his learner's permit. Paying equal attention to minor details, passing thoughts, and larger political concerns around activism and parenting in the Trump-era United States, Huber asks: How can one simultaneously be a good mother, a good worker, and a good citizen? As she reflects on the meaning of protest and on whiteness and other forms of privilege within political activism, Huber offers a wry, self-aware, and stirring testament to the everyday as a seedbed for meaningful change.

Sonya Huber is the author of the award-winning essay collection on chronic pain, Pain Woman Takes Your Keys and Other Essays from a Nervous System, as well as Opa Nobody and Cover Me: A Health Insurance Memoir.